PARIS (Reuters) - France holds elections this month for all 13 regional authorities on the mainland. For President Emmanuel Macron, the stakes are higher than who will get to build a tram in Brittany or high schools in Provence.

WHY DO THEY MATTER?

The next presidential vote is less than a year away. Polls show that contest is most likely to result in repeat of the 2017 duel between Macron and far-right leader Marine Le Pen - only this time the gap between the two will be narrower.

The regional results do not give a representative snapshot of who will win the presidential vote. However, if the far-right secures its first ever regional powerbase it would send tremors across the political landscape.

Macron's ruling La Republique en Marche (LaRem) is not expected to win any region outright, revealing the extent to which it has failed to plant roots locally.

For the conservative Les Republicains party, the challenge is to hold onto their seven regions and demonstrate they too can serve as a bulwark against the far-right. They may be undermined in doing so if forced into second-round alliances with Macron.

HOW DOES IT WORK?

Each party presents a list of candidates. If no single ticket garners more than half the votes in round one, all those with more than 10% of votes go into the second round, meaning there can be three or more parties involved.

Party lists may merge between the first and second round. Historically this has happened to block the far-right from winning, a phenomenon known as a 'front republicain'.

Regional council seats are allocated on a proportional basis. The ticket that wins the most votes wins a bonus of a quarter of the seats. This means Le Pen's party can win control of a region with less than 50% of the vote in round 2.

WHERE ARE THE KEY BATTLEGROUNDS?

The southern region encompassing Marseille and the French Riviera, with above average immigration and unemployment, has long given the far-right some of its best scores.

This time, polls show Le Pen's ticket, headed by a former conservative minister, Thierry Mariani, could win the region that is home to Marseille, France's second city, and tourist hotspots.

Macron's LaRem is too weak to win on its own as is the main conservative opposition party, Les Republicains (LR). Even if all anti-Le Pen groups united, they may still struggle to beat Le Pen, one poll showed.

If left-wing alliance pulls out:

The northern region around Calais, once home to France's coal-mining industry, pits the incumbent and frontrunner to become the conservative's candidate in the presidential election, Xavier Bertrand, against Le Pen's party spokesman and Macron's justice minister.

A win for Bertrand would bolster his chances of becoming LR's presidential candidate. Macron aides see the one-time health minister as a rival who would erode the president's centre-right voting base.

If Bertrand is forced into an alliance with LaRem in the second round to defeat the far-right, it would risk undermining his pitch as Macron's opponent-in-chief in 2022.

Most recent poll for second round (Ifop, June 8):

If Macron's LaRem pulls out or merges: 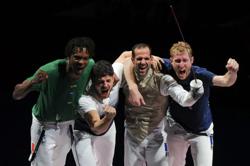