By Alistair Smout and Sarah Young 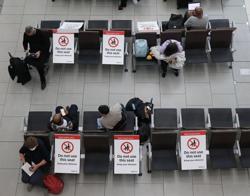 LONDON (Reuters) -Britain is considering easing travel restrictions for double vaccinated people, a move which would placate airlines who are threatening legal action against the government's strict curbs on trips abroad.

Pressure is building in the aviation industry, with airlines desperate for restrictions to be relaxed in time for July and the peak season when they make most of their profits, but Britain sticking to quarantine requirements which deter travel.

Europe's biggest airline Ryanair is set to file papers on Thursday to launch legal action against Britain over its travel policy.

However, Britain has now indicated that a relaxation could be on the cards.

The country's Department for Transport said on Thursday that it was considering how vaccinations could be used for inbound travel. More than half of UK adults have received both doses of COVID-19 vaccine, putting it far ahead of Europe.

Reports in the Daily Telegraph said that Britain was looking to follow the European Union's move to allow fully vaccinated tourists to avoid COVID-19 tests and quarantine from July.

"We have commenced work to consider the role of vaccinations in shaping a different set of health and testing measures for inbound travel," a government spokesperson said on Thursday.

Ryanair, along with British Airways and easyJet have repeatedly called on the government to allow vaccinated travellers to avoid quarantine, as well as for an easing of restrictions to some lower risk countries.

The chief executive of Ryanair has called the UK's travel policy "a shambles", and such is the airline's frustration that it now wants to sue the government over its "opaque" system for classifying travel destinations as green, amber or red.

Under plans being considered by the government, people who have had two doses of COVID-19 vaccines will be allowed to avoid quarantine on their return from amber list countries, although they will still have to be tested, the Daily Telegraph said.

Asked about the report, Financial Secretary to the Treasury Jesse Norman told Sky News on Thursday that nothing was ruled out in considering how to re-open travel.

"We are trying to move cautiously and progressively in the right direction so I wouldn't write anything off at this point," he said.

Britain allowed international travel to resume last month, but nearly all major destinations like Spain, France, Italy and the United States were left off its safe list, and as amber countries require 10 days of quarantine plus multiple tests.

The safe green list is due to be updated on June 24 and the government said in April it will review its travel policy before the end of June.