Another Ortega critic arrested for 'inciting foreign interference' in Nicaragua 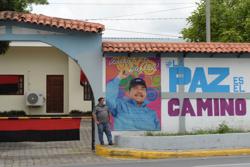 MANAGUA (Reuters) - Nicaraguan police arrested another opposition leader on Sunday as an increasingly authoritarian President Daniel Ortega seeks to tighten his grip on power ahead of his bid for reelection later this year.

Opposition leader Suyen Barahona is the latest Ortega critic to be detained, the eleventh political leader overall caught in a dragnet that includes four possible presidential candidates arrested and disqualified from competing in the November election.

Critical journalists have also been questioned by authorities in recent weeks.

Last week, a senior U.S. diplomat blasted the "wave of repression" by Ortega and his allies, adding the United States is prepared to review trade relations with the Central American nation if the upcoming election is not free and fair.

Ortega loyalists argue they are only enforcing the law, which prohibits would-be candidates from receiving foreign financing or the publication of "false" information.

The Managua home of Barahona, leader of the leftist opposition Unamos party, was raided on Sunday, after three other party officials were arrested by police over the weekend.

The police said Barahona was arrested for seeking to undermine the country's independence and sovereignty, as well as for "inciting foreign interference in internal affairs, requesting military interventions and organizing with foreign financing."

"These actions against the Unamos leadership are part of escalation of repression from the Ortega regime against the democratic opposition," the party said in a statement.