FILE PHOTO: A woman walks in front of a wall with images of people disappeared during the Guatemala civil war ahead of Sunday's presidential election in Guatemala City, Guatemala June 12, 2019. REUTERS/Saul Martinez/File Photo

GUATEMALA CITY (Reuters) - A judge in Guatemala on Wednesday charged six ex-military members for their alleged participation in the death and forced disappearance of at least 183 civilians during Guatemala's civil war in the 1980s.

Judge Miguel Galvez said there was sufficient evidence to bring the retired soldiers to trial for the 1983-1985 crimes, part of a conflict between leftists and the government from 1960-1996 that killed 200,000 people.

About 45,000 people are thought to have been forcibly disappeared after they were kidnapped.

"This court considers it prudent ... to issue an indictment against the accused," Galvez said in a court hearing.

Another six people arrested on suspicion of the crimes were not yet charged but remain in detention, some in other cities and others in hospital facilities.

The dozen suspects are named in a 73-page document known as the "Military Diary," in which the alleged perpetrators recorded kidnappings, executions, tortures and sexual assaults.

The document also contains a list of the 183 victims in which they are described as "subversive" and a "threat" to the government.

Relatively few people have been tried for the crimes and human rights violations of the war, and conservative lawmakers on Monday presented a bill seeking to remove criminal responsibility from military members who participated in crimes during the conflict.

A United Nations-backed commission has said the army committed the majority of the atrocities.

U.S. Vice President Kamala Harris in a visit to Guatemala this week said a U.S. anti-corruption task force would work with local prosecutors as part of an effort to stem migration from the region. She also reiterated U.S. support for an independent judiciary, after changes to the bench of Guatemala's top court excluded one judge whom the United States had vocally supported.

The U.S. State Department, when asked about the "Military Diary" case, said it supported the prosecution of historical crimes to ensure a "peaceful and democratic future" and called for an independent judiciary.

The arrests "represent an important step toward justice for the families of victims," a State Department spokesperson said. 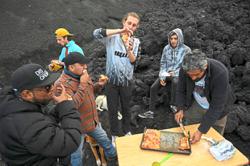