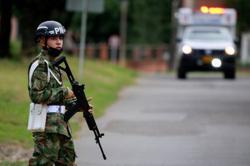 Demonstrators gather outside a local hotel where representatives of the Inter-American Commission on Human Rights (CIDH) and union leaders meet, in Bogota, Colombia June 9, 2021. REUTERS/Nathalia Angarita

BOGOTA (Reuters) - Anti-government protests in Colombia were sparsely attended on Wednesday, but the economic fall-out of the six-week-old demonstrations is far from over, officials said.

Road blockades associated with protests have caused shortages throughout the country, interrupted exports, and hit oil and mining production.

Marches on Wednesday were largely concentrated in the capital, after union and student leaders called for protesters to "take over Bogota." Groups of hundreds gathered at several points around the city.

Talks between protest leaders and the government were suspended https://www.reuters.com/world/americas/colombia-president-announces-policing-changes-amid-brutality-accusations-2021-06-06 over the weekend over discord about a pre-agreement and the blockades.

The national strike committee, made up of unions and other groups, will adopt a new tactic for marches, union leader Francisco Maltes said, adding that the details would be announced on Thursday.

The government estimates blockades and protests have cost the economy some 11 trillion pesos, equivalent to more than $3 billion.

Many protesters have vowed to keep marching until the government makes changes to economic and social policies and tackles alleged police brutality.

Exports have been interrupted by barricades at the principal Pacific port in Buenaventura, where some 378,000 tonnes of corn and other grains are stuck, according to the agriculture ministry.

Around 1.8 million jobs connected to agriculture are at risk, Agriculture Minister Rodolfo Zea said in a Wednesday statement.

"The losses we've had in exportable products are worrying and have especially affected coffee, bananas, avocados, tilapia and sugar," he said.

At least two international buyers have suspended use of Colombian coffee because of delayed or unfulfilled shipments, the coffee federation said this week. Coffee exports fell 52% in May.

The effect of the blockade and resulting shortages was visible in the May inflation figure of 1%, well above market expectations. That sent 12-month consumer prices up 3.30%, above the central bank's 3% target.

Analysts say protests could damage Colombia's post-pandemic economic recovery after strong 1.1% growth in the first quarter. In April, the government estimated expansion could reach 5% this year.

Blockades have stopped the production of some 1.5 million barrels of crude oil and 2.7 billion cubic feet of gas, Mines and Energy Minister Diego Mesa said at a virtual conference on Wednesday.

"It's as if we stopped all the oilfields in the country for close to two days," said Mesa, who told Reuters this week he expects oil output to remain around 780,000-800,000 barrels per day this year.

The government says 21 people have died in connection with the protests, though advocacy groups say the toll is much higher. More than 2,300 people - civilians and security forces - have been injured, the defense ministry says.

Of 3,107 blockades which have taken place during protests, 28 were still active over the weekend, the ministry said.