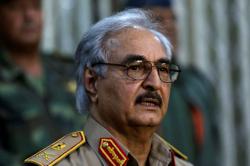 MADRID (Reuters) - A jet flying from Algeria to the northern Spanish city of Logrono turned back after air controllers told it had no permission to enter the airspace, on instructions from the Spanish military, civil air authority Enaire said on Tuesday.

A spokesman for Enaire said the jet was flying from Algiers to the Spanish city of Logrono, where the small domestic airport is operated by Spanish state-contolled Aena.

Logrono is where Polisario front leader Brahim Ghali has been hospitalised more than a month ago sparking a conflict between Spain and Morocco.