By Janis Laizans and Andrius Sytas 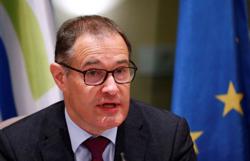 SALCININKAI BORDER CROSSING POINT, Lithuania (Reuters) -Reporters Without Borders (RSF) on Thursday held a protest against the treatment of journalists by Belarus at the country's border with Lithuania, while the leader of Belarus opposition in exile called for more protests on Saturday.

On Sunday Belarus forcibly landed a Ryanair plane flying from Athens to Vilnius and arrested the opposition blogger Roman Protasevich and his girlfriend, who were on board.

Belarusian President Alexander Lukashenko said this week that Protasevich had been plotting a "bloody rebellion."

The incident sparked international outrage and calls for sanctions against Belarus. Minsk accused the West of using the episode to wage "hybrid war."

His social media feed from exile had been one of the last remaining independent sources of news about Belarus, a country sandwiched between Russia and the NATO Western security alliance.

RSF Secretary General Christophe Deloire, who headed the protests, told reporters on Wednesday in Vilnius that Belarus' actions were part of a new way of attacking press freedom and that this was something "not imaginable a few years ago."

"In Belarus, there is an institutional hijacking of a plane, just to arrest the journalist," he said.

He and a dozen Lithuanian and Belarusian protesters held pictures of journalists jailed in Belarus, including Protasevich.

Svetlana Tikhanouskaya, who challenged Belarus' incumbent leader Alexander Lukashenko at the August presidential election and had to leave the country soon after, announced an international act of solidarity with Belarusians on May 29.

Tikhanouskaya, in Vilnius, called on people to take part in protests with local politicians.

Lukashenko has said street protests were no longer possible in Belarus.

Since the crackdown that followed the contested Aug. 9 presidential election in Belarus, 430 journalists were arrested and 20 are still in jail in the country, according to the press advocacy group's count.

(Reporting by Janis Laizans in Salcininkai and Andrius Sytas in Vilnius, additional reporting by Andrey Ostroukh in Moscow; Editing by Alexandra Hudson) 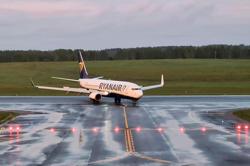 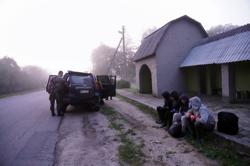