By Alicja Ptak and Andrius Sytas WARSAW/VILNIUS (Reuters) - Roman Protasevich, the Belarusian journalist jailed after his plane was forced to land on Sunday, had decided to avoid flying over Belarus because of the risk of being intercepted but let his guard down, a friend told Reuters.

Protasevich, a critic of Belarusian President Alexander Lukashenko, is now in a Minsk jail along with Sofia Sapega, his girlfriend, on charges his friends say are trumped up.

Charges against him include organising mass riots, and he faces up to 15 years in jail if convicted.

In a dramatic turn of events, a passenger plane carrying them back from a holiday in Greece to their homes in Lithuania was diverted to Belarus on Sunday after authorities there flagged what turned out to be a hoax bomb threat and scrambled a MiG-29 fighter jet to escort the plane to Minsk.

Stsiapan Putsila, a friend and founder of the Warsaw-based anti-government Nexta news outlet where Protasevich worked for 10 months last year, said nobody could have predicted the exact nature of Sunday's events.

But he said Protasevich had once discussed the risks of flying over his home country with him and they had agreed such a move carried risk.

"...It's a real shame that Roman made this mistake because we at some point discussed in a chat that it is not worth flying over Belarus because it is a CIS (Commonwealth of Independent States) country. It's dangerous and they can at any moment stop a plane and force it down," said Putsila.

"But unfortunately Roman's colleagues say he had relaxed a bit in recent times, not feeling threats."

His father, Dzmitry, said his son's two-week holiday to Greece had been a rare break from the intensity of his work at a different anti-government news outlet.

"It so happened that it was his first holiday in three years, he did not want to go but his friends simply forced him to go in order to rest," he said.

Protasevich travelled with Sofia, his 23-year-old girlfriend. The couple had been dating for less than six months, Anna Dudich, her mother told Reuters.

His Greek holiday was a much-needed break after working at Nexta in Warsaw last year for eight months straight including weekends, said Putsila.

When helping live-stream huge anti-government protests, Protasevich, 26, was consumed by his work, he recalled, saying the team worked 24/7 and slept on mattresses.

With boyish looks, Protasevich was not yet born when Lukashenko, who once ran a Soviet state farm, came to power in 1994. But bringing the veteran leader down became his obsession, say some people who know him.

"He was a journalist, then an activist, then a journalist again. He had the skill of a young political leader, he has been trying to get involved in all movements, rallies and campaigns for democracy in Belarus since 2011-12," said Franak Viacorka, an adviser to the Belarusian opposition.

Viacorka said Protasevich had been worried he was being followed before boarding the flight for Vilnius.

"Nobody took it seriously," he said. "Come on! Athens, Greece, you're on vacation, who would be following you? You're paranoid..."

Protasevich, who did his first journalism aged 16, fled to Poland from Belarus in 2019 after feeling the heat from the authorities and ensured his parents relocated later too.

Footage of Protasevich outside Nexta's office last year showed him shouting in the street that he thought his country was on the brink of huge changes, which ultimately failed to materialise after a sweeping crackdown on mass protests.

In September he moved to Vilnius, the capital of Lithuania, which has become a hub for the Belarusian opposition.

Putsila said Protasevich had invited him to fly to Greece too, but that he had refused because he didn't have time.

"He said he'd share some routes one could fly in order to unwind," said Putsila. "Unfortunately one of those routes turned out to be fatal for him." 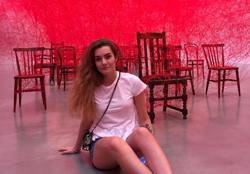