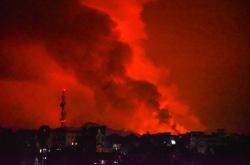 FILE PHOTO: A pedestrian walks near a crack on the road caused by earth tremors as aftershocks following the eruption of Mount Nyiragongo volcano near Goma, in the Democratic Republic of Congo May 26, 2021. REUTERS/Djaffar Al Katanty

GOMA, Democratic Republic of Congo (Reuters) -Thousands of people fled the Congolese city of Goma any way they could on Thursday after officials said magma under the city could cause a second volcanic eruption and ordered parts of the city to evacuate.

More than 20,000 people are homeless and 40 still missing following Saturday evening's eruption, which sent rivers of lava flowing toward Goma, killing at least 31 and destroying more than 3,000 homes, according to the United Nations.

The city has been rocked by hundreds of earthquakes and seen large cracks appear in the earth in the days following the eruption.

On Thursday morning thousands of people evacuated by car, by motorbike and on foot, with huge bundles of possessions on their heads, creating traffic jams across the city. Many others left on large boats across the lake that abuts the city of 2 million.

Dozens of people were seen trying to board boats at the port, in videos shared on social media.

Seismic and ground deformation data indicates the presence of magma - the molten rock which normally stays beneath the earth's crust - under Goma, extending under Lake Kivu, said Ndima Kongba, the military governor of North Kivu province.

"Given these scientific observations, an eruption on land or under the lake cannot be ruled out at present, and it could occur with very little or no warning," Kongba said.

Ten neighbourhoods in the east of the city, which lay in the path of lava from the previous eruption in 2002, needed to evacuate to Sake, another lakeside town around 13 miles (21km) northwest, he said.

"Evacuation is compulsory, those who do not adhere swiftly, carry unnecessary risks. A return home can only take place on the recommendation of the provincial authority."

On Wednesday the U.N. said it was temporarily relocating around 250 non-essential staff, around half of its aid workers, and about 1,500 of their dependents to the city of Bukavu, around 50 km (30 miles) south.