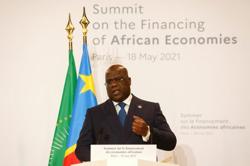 KINSHASA (Reuters) - The Ugandan and Congo armies are setting up an operations centre in the east of Democratic Republic of Congo for a joint offensive against Islamist rebels who have killed hundreds of people in the last year, Congo's government said.

On Sunday a delegation from the Ugandan Peoples Defence Force (UPDF) including the commander of Uganda's ground forces arrived in Beni in Congo's North Kivu province to establish a coordination centre for the two armies, Kinshasa's communications ministry said on Wednesday.

A Congo army spokesman was not immediately available for comment. A Ugandan army spokesman said he could not confirm the information given by Congo's government.

On May 3 Congo introduced martial law in North Kivu and Ituri provinces in the hope of addressing worsening bloodshed in a swathe of territory along its border with Uganda.

The countries were enemies during Congo's civil wars, which officially ended in 2003. Relations between the two have at times been strained since then.

A militia with roots in Uganda, the Allied Democratic Forces (ADF), is believed to be responsible for much of the recent violence, killing around 850 people last year, according to U.N. figures.

"The (Congolese army) and the UPDF are determined to fight the ADF," Congo's ministry of information said in a statement, without giving further details.

The ADF has carried out a spate of reprisal attacks on civilians since Congo's army began operations against it in late 2019.

In March the United States labelled the group a foreign terrorist organisation because of alleged links to the Islamic State group, although the United Nations has consistently played down the strength and nature of IS influence in Congo.

In April, Congo said it was seeking over $4 billion in reparations from Uganda for its role in the conflicts between 1998-2003 that included supporting rebel groups.