KYIV (Reuters) - Ukraine does not expect next month's NATO summit will produce a Membership Action Plan (MAP) for Ukraine, because some member states worry it will provoke Russia, Foreign Minister Dmytro Kuleba said on Tuesday.

"Regarding the obstacles, unfortunately, there are still several countries among the allies who are guided by the logic of not provoking Russia and believe that sitting and doing nothing is the best way to keep Russia calm," he told the Ukraine 24 channel. 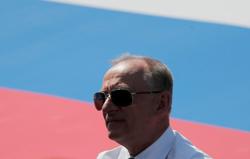