In Turkey, protests against Israel over surge in violence 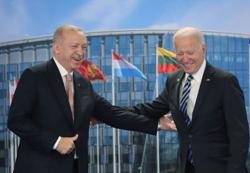 Pro-Palestinian demonstrators light flares during a protest against Israel near the Israeli Consulate in Istanbul, Turkey late May 10, 2021. REUTERS/Dilara Senkaya

ANKARA (Reuters) - Thousands of people gathered outside the Israeli embassy in Ankara and its consulate in Istanbul to protest at Israeli actions against Palestinians on Monday while President Tayyip Erdogan spoke to Middle East leaders about the rising violence.

Despite a full lockdown aimed at curbing coronavirus cases, the protesters in Istanbul, including Syrians and Palestinians, carried Palestinian flags while chanting, "(Turkish soldiers) to Gaza" and "Down with Israel, down with America."

According to a statement from his office, Erdogan told King Abdullah that the "inhumane" attacks against Palestinians were aimed at all Muslims, adding that Turkey and Jordan needed to work together to stop them.