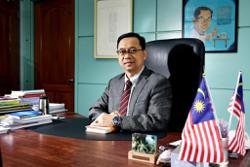 Jordanian Foreign Minister Ayman Safadi speaks to the media before a meeting with U.S. Secretary of State Antony Blinken at the State Department in Washington, U.S., May 10, 2021. Saul Loeb/Pool via REUTERS

WASHINGTON (Reuters) - U.S. Secretary of State Antony Blinken on Monday said the rocket attacks from Gaza against Israel should stop "immediately," and he urged all sides to take steps to reduce tensions.

"We're very focused on the situation in Israel, West Bank, Gaza, very deeply concerned about the rocket attacks that we're seeing now, that they need to stop, they need to stop immediately," Blinken said ahead of meeting with Jordanian Foreign Minister Ayman Safadi.

Safadi urged the United States to play a leadership role in reducing the violence.

Blinken also expressed concerns about the violence and 'provocative actions' in and around Haram al-Sharif, the hilltop compound in Jerusalem’s walled Old City known to Jews as the Temple Mount.

Tensions have been running high in the region for days. On Monday, Palestinian fighters in the Gaza Strip fired rockets toward the Jerusalem area and southern Israel, carrying out a threat to punish Israel for violent confrontations with Palestinians in Jerusalem.

Gaza's ruling Islamist group Hamas had given an ultimatum demanding that Israel stand down forces in the al Aqsa mosque, Islam's third most sacred site.