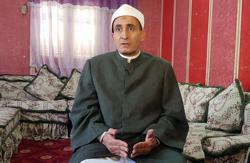 FILE PHOTO: Children stand next to a damaged wall at the site of a car bomb blast that targeted schoolgirls in Kabul, Afghanistan May 10, 2021. REUTERS/Stringer

KABUL (Reuters) - Amina was one of the hardest-working girls in her class at Sayed Ul-Shuhada High School in west Kabul, her best friend remembers, determined to become a doctor to treat Afghanistan's thousands of war victims.

Amina became a victim herself on Saturday, killed in a massive bomb blast as she and dozens of girls left school in the minority Hazara neighbourhood that has repeatedly been targeted by militants.

Masooma, 17, who was holding back at school with friends, narrowly missed the blast.

"It was like the sky was falling in," she said.

Mourning her friend, Masooma is now torn between fear of returning to class and a defiant desire to complete her education.

"I am scared. It will be difficult to return," she told Reuters. "But I will. I want to be a doctor to make sure that Amina's dream does not go away."

Masooma's dilemma matches that of many in the Hazara community and of girls throughout Afghanistan, as foreign forces prepare to leave, security deteriorates and emboldened hard-line Islamist groups threaten years of gains in girls' education.

Afghanistan marked an official day of mourning on Tuesday as the death toll rose to at least 80. Some 160 were wounded, most of them girls. No group has claimed responsibility.

The insurgent Taliban, who say they are open to girls' education to the extent allowed by Islamic law, or sharia, have denied any responsibility and condemned the bloodshed.

But amid growing insecurity and targeted attacks on civilians and women, many officials and analysts fear hardline groups like Islamic State could threaten years of gains in girls' education.

During the Taliban's hardline rule from 1996 until their ouster in 2001, girls were blocked from school, nearly all women had to quit work, their movement was restricted and a strict dress code enforced.

More than 3.5 million girls are now enrolled in school, according to the USAID, compared to none during the Taliban era. But an estimated 3.7 million children remain out of school, 60% of them girls, according to UNICEF.

"This attack will have a huge impact on girls across the country," said Heather Barr, interim co-director of the women's rights division of Human Rights Watch.

"We hear again and again from parents and girls about how they factored in attacks ... into decisions about whether girls could study, even when those attacks were years earlier, or on the other side of the country."

The attack has already had ripple effects. Students at other schools described frantic calls and texts after the attack as parents called them home.

Sixteen-year-old Sara, a student at a Kabul high school, said she was disturbed by the images of the bodies on TV and social media.

"I am distracted, I cannot concentrate," she said. "I study, but I do not learn."

Khadija, 46, a mother of two daughters and a son, said she was thinking of pulling her children out of school.

"I prefer them to remain illiterate but alive," she said.

The United States and many other Western nations have touted girls' education as one of the key successes of years of foreign presence in Afghanistan, but the gains are fragile. Foreign troops are set to withdraw by Sept. 11 and efforts to secure a truce between the government and the Taliban are largely stalled.

"A picture is beginning to emerge which is deeply alarming, with violence escalating and women and girls increasingly targeted while the world moves on," said Barr.

Many girls told Reuters they were determined to return to school, but anxiety runs high.

"People are shocked and in huge pain right now, so no one has yet decided whether or not to allow their children to go to school in future or not," said Hakimi, the brother of 16-year-old victim Marina.

Marina had dreamt of becoming a member of parliament and had been looking forward to celebrating Eid, marking the end of the Muslim fasting month, this week, wearing the new dress she had bought for the occasion.

Hakimi arrived at the school soon after the blast. Finding a shoe he believed belonged to his sister he spent hours searching for her, finally finding a matching shoe on a badly burned body in hospital.

"Not only Marina, all of us died that day," he said.

Injured girls in hospital were asking their doctors when they could go back to school, according to their family members, and school principal Aqeela Tawakuli described her students as passionate about education and expects they will fight to return Eid later this week.

The school re-opened on Sunday, she said, but no children turned up.