BOGOTA (Reuters) - Road blockades connected to anti-government protests in Colombia, which marked their eighth day on Wednesday, have halted shipments of top agricultural export coffee, the head of the grower's federation said.

The protests, originally called in opposition to a now-canceled tax reform plan, are now demanding the government take action to tackle poverty, police violence and inequalities in the health and education systems.

"We are stopped completely, exports are stopped, there is no movement of coffee to ports nor internally," federation head Roberto Velez said in a phone interview.

Road blockades, some mounted by truckers in support of national strike efforts and others manned by demonstrators, have sprung up around the country.

One major blockade is preventing goods from arriving to or leaving from the Pacific city of Buenaventura, a major port.

The barricades are especially affecting growers in Huila, Valle del Cauca, Cauca and Narino provinces who are in the midst of their main harvest, Velez said.

"We don't have an estimate of how much coffee is stopped but we have gone 4 or 5 days without being able to export."

Storage space is not yet overtaxed, he added, but could become so if protests continue.

Protesters and the government should try to work out their differences, Velez said, and in the meantime "not destroy the national economy."

Coffee-growers, who are enjoying relatively high prices on the New York market of $1.48 per/lb., have not yet joined national strike efforts. 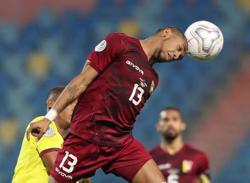