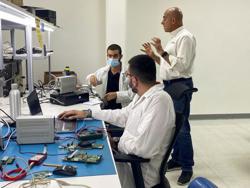 BEIRUT (Reuters) - France's foreign minister carried a message to Lebanese leaders on Thursday that Paris was losing patience with a deadlock in cabinet talks that has worsened the country's economic collapse.

Paris, which has led aid efforts to its former colony, has sought to ramp up pressure on Lebanon's squabbling politicians, after failed attempts to rally them to agree a new government and launch reforms to unlock foreign cash.

Last month, France said it was taking measures to restrict entry for some Lebanese officials for blocking efforts to tackle the unprecedented crisis, which is rooted in decades of state corruption and debt.

The currency has crashed, the banking sector is paralysed and much of the population is now poor.

Two diplomats said Le Drian wanted to send a clear message that Paris supports the Lebanese people, but that it had had enough of the political class that had failed to meet its commitments.

"He came to Beirut to give Lebanese officials a strongly worded message, to tell them 'Lebanon is sinking and you are the ones sinking it even more...And if you don't help yourselves, nobody can help you'," a senior Lebanese political source said.

Le Drian's brief trip was set to focus on visiting schools and Beirut port, where last August's massive explosion devastated swathes of the capital. The outgoing government has served in a caretaker role since resigning over the blast, which killed 200 people.

Before flying to Beirut, Le Drian had warned on Wednesday of punitive measures against those who were hindering progress. "It is only the beginning," he tweeted.

Still, there has been no official announcement of what steps France has taken, or against whom, and the potential impact is unclear as some Lebanese politicians hold dual nationality.

The two diplomats said it was unlikely Le Drian would meet Gebran Bassil, head of Lebanon's biggest Christian bloc and Aoun's son-in-law who was hit with U.S. sanctions last year for alleged corruption and his ties to Hezbollah.

Officials had declined to confirm a meeting with Saad al-Hariri, a three-time premier who was designated to form a new government in October but has been locked in a stand-off with Aoun over the line-up.

Hariri's office did not respond to requests for comment.

(Reporting by Laila Bassam and Ellen Francis in Beirut and John Irish in Paris,; Editing by Timothy Heritage/Mark Heinrich) 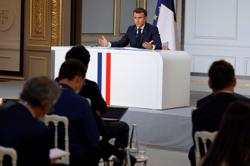 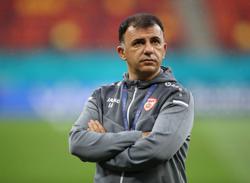