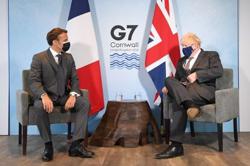 LONDON (Reuters) - Britain criticised France's threat to cut power supplies to the British Channel Island of Jersey after a row over post-Brexit fishing rights and will send two offshore patrol vessels to the area to monitor the situation.

"The prime minister underlined his unwavering support for Jersey," a spokesman for Johnson said after he spoke to officials in Jersey. "He said that any blockade would be completely unjustified. As a precautionary measure the UK will be sending two offshore patrol vessels to monitor the situation."