By Edward McAllister and Madjiasra Nako

French President Emmanuel Macron takes his seat in the front row next to Mahamat Idriss Deby, son of the late Chad's president, during the state funeral for the late Chadian President Idriss Deby in N'Djamena, Chad April 23, 2021. Christophe Petit Tesson/Pool via REUTERS

N'DJAMENA (Reuters) -Thousands of people attended the funeral of Chad's slain leader Idriss Deby on Friday, with French President Emmanuel Macron leading tributes to the long-ruling strongman whose death in a battle with rebels has thrown the country into crisis.

Macron said France would not let anyone threaten the stability of its former colony - a reflection of worries that more turmoil will hamper the fight against Islamist militants across the Sahel region.

Deby, a lynchpin in Western security strategy, was killed on Monday in a battle against a rebel army led by dissident army officers who are not linked to jihadists, according to Chadian authorities.

France also supported a transition to democracy in Chad, Macron said in his speech to mourners, after a military council took power following Deby's death.

A source at the French presidency said France and regional countries were pushing for a mixed civilian-military transitional government. A prominent opposition leader, Succes Masra, endorsed that approach, calling for a civilian interim president with a vice president named by the military.

The African Union's Peace and Security Council expressed "grave concern" about the military takeover and urging the authorities to "expeditiously" move to hand power over to civilians.

The military council has said it intends to oversee an 18-month transition to elections while leading the response to the rebel offensive.

The rebels said on Friday their command centre was bombed on Wednesday night in an attempt to kill their leader.

They have swept south across the vast desert nation from their bases in Libya, and have said they are about 200-300 km (125-190 miles) from the capital, N'Djamena.

Despite warnings from the rebels not to attend for their own security, African presidents and prime ministers joined dignitaries and ordinary citizens in the city's Place de la Nation for the funeral ceremony.

Deby's coffin, draped in a national flag, was carried on a military truck flanked by a motorcycle escort. Weeping swelled from the crowd and a 21-gun salute boomed across the city.

Macron was seated for the ceremony next to Deby's son Mahamat Idriss Deby, who was appointed interim president for an 18-month transitional period by the military council.

"France will not let anybody put into question or threaten today or tomorrow Chad's stability and integrity," Macron said in his speech.

"France will also be there to keep alive without waiting the promise of a peaceful Chad creating a place for all of its children and components," he said, calling the late president a friend and courageous soldier who had given his life to his country.

Human rights groups have accused France and other Western powers of turning a blind eye to government repression during Deby's 30-year rule because of his co-operation on security matters.

As the funeral took place, Masra, wrote on Twitter that the police had surrounded his party's headquarters. He posted a photo of several police cars parked outside.

"In the middle of the ceremony honouring Idriss Deby, the son sends the police to encircle the Transformers headquarters," Masra wrote, referring to the name of his party. "The world therefore sees that the system has not changed."

The authorities could not be immediately reached for comment.

Nonetheless, many Chadians were deeply upset by Deby's death.

"He protected us for so long that today we have come to wish him eternal rest. A deserved rest," said N'Djamena resident Hassan Adoum.

Before the ceremony, Macron and regional leaders met with the 37-year-old Mahamat Idriss Deby and members of the military council.

The French presidency source said France and the G5 Sahel nations had offered support for a civilian-military transition. The G5 are Burkina Faso, Chad, Mali, Mauritania, and Niger - all beset by Islamist militant threats.

He said the Chadians proposed that the transitional government be modeled after the one in Mali, which was created after a military coup last August. The president would be a civilian and the vice president would be nominated by Deby and responsible for security and defence issues.

There would also be a prime minister at the head of an inclusive government resulting from multi-party talks.

In its statement, the African Union's Peace and Security Council urged Chadian authorities "to respect the constitutional mandate and order, and to expeditiously embark on a process of restoration of constitutional order and handing over of political power to the civilian authorities".

Opposition leaders, labour unions and civil society organisations in Chad have all denounced the military takeover, and an army general said this week that many officers are opposed to the transition plan.

The rebels of the Front for Change and Concord in Chad (FACT) said warplanes bombed their centre on Wednesday night in an attempt to kill their leader, Mahamat Mahadi Ali. They accused France of supporting the raid with aerial surveillance.

The group did not specify where the command post was located or give details of any casualties or damage.

The French army said it had not carried out any air strikes this week in Chad. Chad's army did not respond to a request for comment.

France has about 5,100 troops based across the region and has its main base in N'Djamena. The United States also has military personnel there. 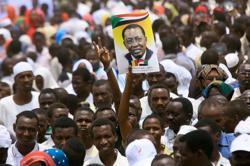 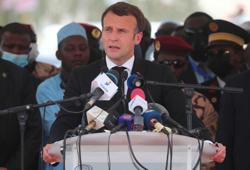