"Your wife, your parents and you are sentenced to the capital punishment, your time is running out," the anonymous letter said, according to a picture of the letter posted by former minister Iglesias on Twitter.

He also posted a picture of four bullets together with the letter's envelope.

Poney-tailed Iglesias has emerged as one of Spain's main political leaders after Podemos, created in 2014 and later renamed Unidas Podemos, has become the main group on the far-left.

The party has allied with center-left Socialist Party in January 2020 to form the first coalition government since the return of democracy in Spain in the 1970s.

Iglesias was Social Rights Minister until March, when he quit to run in regional elections in Madrid, scheduled on May 4.

Politicians from the government coalition, including Prime Minister Pedro Sanchez, and form the main parties have expressed solidarity with Iglesias and Marlaska. 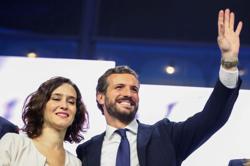