FILE PHOTO: Protesters take cover behind barricades during a demonstration against the military coup in Mandalay, Myanmar March 21, 2021. REUTERS/Stringer

JAKARTA (Reuters) -Southeast Asian leaders will try to persuade Myanmar's junta to end violence and let in aid at a summit on Saturday, diplomats said, in the first concerted international effort to ease the crisis in the country.

Leaders will meet behind closed doors at the Association of Southeast Asian Nations (ASEAN) summit in Jakarta, Indonesia, in the hope of encouraging candid discussions, two diplomatic sources told Reuters.

Senior General Min Aung Hlaing, Myanmar's junta chief who ousted the civilian government on Feb. 1, is likely to attend, officials and diplomats in the host nation have said.

The Southeast Asian country has been in crisis since the February coup, with almost daily protests and a crackdown by the junta in which hundreds of people have been killed.

Initiatives being considered by ASEAN include a pause in violence to allow medical and food supplies into Myanmar, and the appointment of a special envoy to encourage dialogue between the military regime and its opponents in the rival National Unity Government (NUG), the sources said.

No nations outside of ASEAN will be present at the talks, although some of the participating nations and the U.N. special envoy on Myanmar, Christine Schraner Burgener, will hold meetings on the sidelines of the event, they added.

A spokesman for the NUG, formed by ousted lawmakers and some ethnic groups opposed to the junta, told Reuters the group had "been in contact with ASEAN leaders", but had not been officially invited to the summit.

In Yangon, Myanmar's commercial capital, scores of protesters chanted "What do we want? Democracy" as they briefly marched through downtown areas of the city. No one was arrested, witnesses said.

"As a state party to the UN Convention Against Torture, Indonesia has a legal obligation to prosecute or extradite a suspected perpetrator on its territory," Amnesty said in a statement.

The junta said earlier this month protests against its rule were dwindling because people wanted peace.

ASEAN traditionally does not interfere in the internal affairs of a member state and how it deals with the Myanmar crisis will be its biggest test yet, the human rights group said.

"The bloc's usual commitment to non-interference is a non-starter: this is not an internal matter for Myanmar but a major human rights and humanitarian crisis which is impacting the entire region and beyond," Emerlynne Gil, Amnesty’s Deputy Regional Director for Research, said in the statement.

Indonesian Foreign Minister Retno Marsudi said the leaders of Laos, the Philippines and Thailand would send representatives, but did not confirm whether the Myanmar junta chief would attend.

"The commitment of leaders to meet physically is a reflection of a deep concern about the situation in Myanmar and ASEAN's determination to help Myanmar get out of this delicate situation," she said at a news conference.

Myanmar's military has shown no sign of wanting to talk to members of the government it ousted, accusing some of them of treason, which is punishable by death. The junta has called the NUG an unlawful organisation.

The Assistance Association for Political Prisoners, a Myanmar activist group, says 739 people have been killed by security forces since the coup and 3,300 people are in detention. 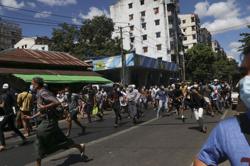