SYDNEY (Reuters) - The gunman who killed 51 people in the Christchurch mosque attacks has dropped legal challenges over his prison conditions and his status as a "terrorist entity", the New Zealand Herald reported on Friday.

A minute released by Justice Geoffrey Venning showed Brenton Tarrant had withdrawn his application, the newspaper reported. The document was not immediately available from the court.

White supremacist Tarrant was sentenced last August to jail for life without parole for the murder of 51 people and attempted murder of 40 others at two mosques in Christchurch on March 15, 2019, the worst mass shooting in the country's history.

Tarrant, an Australian national, is the only person in New Zealand to be designated the status of terrorist.

Tarrant had launched the legal challenge last week. He did not appear in the court for the hearing. 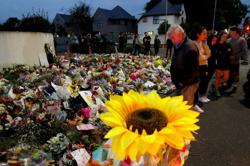