Russia earlier announced it was ordering troops back to base from the area near the border with Ukraine, apparently calling an end to a buildup of tens of thousands of soldiers that had alarmed the West.

"The reduction of troops on our border proportionally reduces tension," Zelenskiy wrote on Twitter. "Ukraine is always vigilant, yet welcomes any steps to decrease the military presence & deescalate the situation in Donbass." 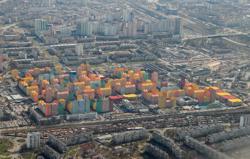