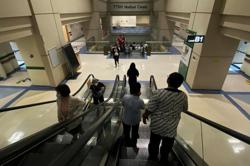 FILE PHOTO: Singapore's Minister of Manpower Josephine Teo tours a dormitory room for migrant workers who have recovered from the coronavirus disease (COVID-19), amid the outbreak in Singapore May 15, 2020. REUTERS/Edgar Su

SINGAPORE (Reuters) - Singapore's manpower ministry said authorities were investigating the possibility of COVID-19 re-infections among residents in a migrant workers' dormitory, after finding more positive cases in the facility.

Authorities had conducted COVID-19 tests on all residents at Westlite Woodlands Dormitory after a 35-year-old worker was found positive on April 20 as part of routine testing.

The worker had completed his second vaccination dose on April 13. His room-mate also tested positive.

To date, 10 workers who previously showed a positive serology test result were found to be COVID-19 positive. Serology tests indicate past infection.

"These cases were immediately isolated and conveyed to the National Centre for Infectious Diseases (NCID) to investigate for possible re-infection," the manpower ministry said in a statement issued late on Wednesday.

The Straits Times newspaper reported, without citing sources, that plans were now being made to move hundreds of workers to a quarantine facility.

Singapore last reported more than 10 cases among dormitory residents in September, with barely any new infections over the last few months.

The city-state has largely brought the virus under control locally.

The bulk of its more than 60,000 COVID-19 cases since the pandemic started, occurred in the cramped dormitories that house mainly South Asian low-wage workers, triggering lockdowns of the facilities.

The workers in the dormitories are still mostly separated from the rest of the population in the city-state, being mainly only allowed out of their residence for work.

(Reporting by Chen Lin and Aradhana Aravindan in Singapore; Editing by Ed Davies)