(Reuters) - Australia and New Zealand began quarantine-free travel on Monday. Here are quotes from people travelling and meeting loved ones coming off the first flights.

"We're very excited to be heading back home but we're gonna miss our family (in Australia) big time."

"We came to Australia on Dec. 11 to spend Christmas with our children ... planning to go back in February; it's been a bit of a nightmare."

"It was quite the emotional rollercoaster here in Sydney. The check-in area was a hive of activity and at the boarding gate, customers were eager to get on."

"I didn't realise how emotional I was going to be today.

"We're so privileged here in Australia and in New Zealand to be able to travel like that. It's weird being on a plane again."

"We want to make sure that we get international travel back to some sort of normality. Even in the next few months, because it's so important that we get Australians to able to travel and people to be able to come here and spend their dollars and have a good time.

"I haven't been excited, I haven't looked forward to it, I haven't planned anything because I just didn't think it was going to happen but we're here...

"Quite emotional, it's nice to be back in Australia."

"This is terrific, really looking forward to this."

"He's been away since November 2019, and both his parents passed away while he was gone and we haven't seen him in a long time, so we're very excited.

"I couldn't even give him a hug when they passed away, so, sorry, we're very excited for him to come back."

TRISH STAMOULOS, TRAVELLING TO NEW ZEALAND TO VISIT HER DAUGHTER, FROM SYDNEY AIRPORT, TO SEVEN NETWORK:

"My daughter has been in New Zealand since Jan. 20. She's dancing in a dance crew, over in Auckland, so finally I left her there. She was 15, she's 16 now, so it's a bit emotional for me.

"I have not seen her for over a year. Today's the day.

"She called me while the press conference was on and said 'Mum, you gotta get a flight'. So happy'."

"I think you'd have to be a bit brave and a bit bold to try this one but I'm having faith that, I think, it's been around for long enough so should be able to roll out."

JOHN PALALAGI, TRAVELLING TO NEW ZEALAND FOR A FUNERAL, AT SYDNEY AIRPORT, TO SEVEN NETWORK:

"There's a big group of us, there's about 13 of us going down to help support my brother and just enjoy the last bits before he goes down. We're looking forward to being there and being a part of, to link up with the family in New Zealand, they're all waiting for us. The funeral was supposed to be on Saturday, but they've delayed it for Monday for us to come over and join them."

"I normally go home about six times a year, so it's quite good. It's going to be a happy occasion.

"I think there's going to be a few tears. A lot of hugs, a lot of tears, but happy tears."

"We were there in January last year, we were fortunate to go back for a wedding but since they locked it down, and we haven't been able to control that, it feels like forever.

"Mixed emotions. Happy, sad, can't wait. Most importantly getting the kids to see each other and meet all the newborns that we haven't seen yet." 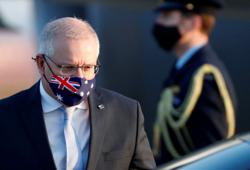