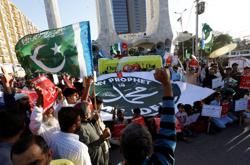 A hawker on bicycle rides past a closed wholesale cloth market during a countrywide strike by the banned Islamist political party Tehrik-e-Labaik Pakistan (TLP) in Karachi, Pakistan April 19, 2021.REUTERS/Akhtar Soomro

ISLAMABAD (Reuters) - Islamist radicals in Pakistan have released 11 police officers that were taken hostage during violent anti-blasphemy protests against France over the weekend, the interior minister said on Monday.

The officers were snatched by members of the Tehrik-e-Labaik Pakistan (TLP) during clashes outside the group's headquarters in the eastern city of Lahore. Three TLP members were killed during the violence, according to the Islamists.

Photographs of the captured police, with their heads, legs and arms heavily bandaged, were posted on social media by their captors.

"They've released the 11 policemen they had held hostage," the interior minister, Sheikh Rashid Ahmad, said in a video statement.

He said negotiations had with the TLP had begun. The government outlawed the TLP last week after it blocked main highways, rail tracks, and entry, exit routes to major cities, attacking police and burning public property.

At least four police have been killed, and more than 500 wounded in the violence that erupted last week after the government detained the TLP leader, Saad Hussain Rizvi, ahead of a planned countrywide anti-France campaign.

The Islamists are seeking the expulsion of the French ambassador, as a diplomatic response to cartoons in France depicting Prophet Mohammad, which Muslims regard as blasphemous.

Protests broke out last year in several Muslim countries over the response in France to the killing of a teacher who showed cartoons of the Prophet Mohammad during a civics class. The cartoons were re-printed elsewhere.

At that time, Prime Minister Imran Khan's government signed a deal promising to present a resolution in parliament by April 20 to seek approval for the expulsion of the envoy and for a boycott of French products.

TLP and its associated groups have issued a call for businesses and transport in main cities to shut, starting with the southern port city of Karachi, the country's commercial hub.

France has advised its citizens to leave Pakistan temporarily.

Due to the TLP strike call, the Pakistan Stock Exchange main KSE-100 index opened over 500 points down on Monday, though analysts expect the weakness to be short-lived as the government was already in negotiations with the group. 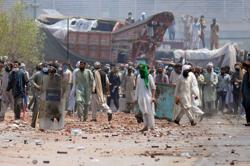