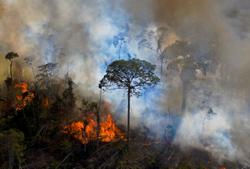 FILE PHOTO: French President Emmanuel Macron, wearing a protective face mask, visits a child psychiatry department at Reims hospital to discuss the psychological impact of the COVID-19 crisis and the lockdown on children and teenagers in France, April 14, 2021. REUTERS/Christian Hartmann/Pool

"We have to define clear red lines with Russia," Macron said, according to a video excerpt of the interview to be aired later on Sunday.

"This is the only way to be credible. Sanctions are not sufficient in themselves but sanctions are part of the package," he said, adding that he also agreed with U.S. President Joe Biden's willingness to open a dialogue with Russian President Vladimir Putin at a time of festering tensions.

Macron's remarks departed from France's previous stance on Russia and shifted the country closer to its U.S. ally.

Since his election in 2017, the French leader had tried to reduce distrust between Russia and the West, hoping to enlist Russian help in solving the world's most intractable crises.

Macron's comments come amid some of the worst friction between the United States and Russia since the 1989 end of the Cold War.

The United States last week imposed a broad array of sanctions on Russia, including curbs to its sovereign debt market, ove what it said was Moscow's interference in last year's U.S. election, Russian cyber hacking, bullying of Ukraine and other alleged malign actions.

In response, Russia on Friday told 10 U.S. diplomats to leave the country and suggested the U.S. ambassador return home for consultations.

In Europe, tensions between Moscow and Kyiv have also been rising amid a build-up of Russian troops along the border with Ukraine and clashes in that country's east between the Ukrainian army and pro-Russian separatists.

In another sign of broader tensions, the Czech Republic said on Sunday it had informed NATO and European Union allies about suspected Russian involvement in a 2014 ammunition depot explosion and the matter would be addressed at an EU foreign ministers' meeting on Monday. 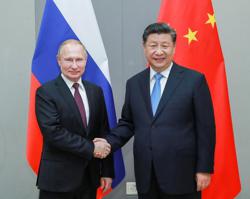