WASHINGTON (Reuters) - A shift in Cuba policy is not among President Joe Biden's top foreign policy priorities, the White House said on Friday, when asked about plans by Raul Castro to step aside as Communist Party first secretary, the most powerful job in Cuba.

White House Press Secretary Jen Psaki said U.S. policy toward Cuba would be governed by two key principles - support for democracy and human rights, and the belief that Americans, especially Cuban-Americans, were the best ambassadors for freedom and prosperity.

While shifts in Cuba policy were not a top priority for Biden, the administration would remain engaged and focused on leadership changes on the Communist-run island, Psaki said. 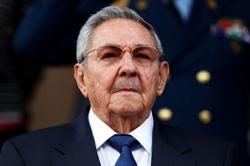