"Economic sanctions which impact the replicability of the JPMorgan fixed income indices will result in an Index Watch (observation period) followed by potential rebalance actions such as exclusion of the sanctioned bonds/issuers from the benchmark," JPMorgan said.

Russia's share in JPMorgan's GBI-EM index, the main global benchmark for emerging market local currency bonds, now sits at 7.1% compared with 8.9% a year ago and the maximum possible 10% in 2014 before Russia was hit with Western sanctions for annexing part of Ukraine.

JPMorgan added there would be no immediate impact on the existing EMBI or GBI-EM series composition.

"Existing index composition, i.e. rouble-denominated Russia government bonds (OFZs) in the GBI-EM series, dollar- and euro-denominated Russia sovereign and quasi-sovereign bonds in the EMBI and Euro EMBIG series, will remain eligible at this time provided these securities satisfy all other index eligibility criteria."

As with other index constituents, the eligibility of Russian bonds in the various indexes will depend on liquidity and accessibility, JPMorgan said. 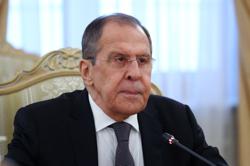