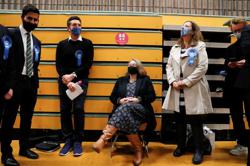 FRANKFURT (Reuters) - Europe's drug regulator on Friday said it would hold a press briefing on its review of very rare blood clotting disorders associated with the use of Johnson & Johnson's COVID-19 vaccine on Tuesday, April 20, at 1500 GMT.

The European Medicines Agency (EMA) had previously announced it would provide an update on its review of the cases, which have occurred in the United States, next week. It has so far maintained that the benefits of the shot outweighed the risk of any side effects.