Syria denies OPCW report on use of chlorine bomb

FILE PHOTO: The headquarters of the Organization for the Prohibition of Chemical Weapons (OPCW) is pictured in The Hague, Netherlands, October 4, 2018. REUTERS/Piroschka van de Wouw

BEIRUT (Reuters) - Syria denied a report by the global chemical weapons watchdog which said there were reasonable grounds to believe that the Syrian air force dropped a chlorine bomb on a residential area in the rebel-controlled Idlib region three years ago.

"The report includes false and fabricated conclusions," the foreign ministry said in a statement. "The ministry condemns the report in the strongest terms."

Syria and its military ally Russia have consistently denied using chemical weapons during President Bashar al-Assad's decade-old conflict with rebel forces, saying any such attacks were staged by opponents to make Damascus look like the culprit.

Monday's report by the OPCW chemical weapons watchdog's investigative arm said no one was killed in the February 2018 attack but a dozen people were treated for symptoms consistent with chemical poisoning.

"We in Syria do not believe - not on a practical or moral level - in using these weapons," foreign minister Faisal Mekdad said in an interview with Syrian state broadcaster Ekhbariya. 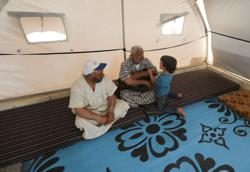