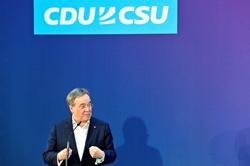 FILE PHOTO: Bavarian State Premier Markus Soeder wears a protective mask as he arrives for a cabinet meeting in Munich, Germany, March 30, 2021 amid the coronavirus pandemic. Peter Kneffel/Pool via REUTERS

BERLIN (Reuters) - The leader of Bavaria's Christian Social Union (CSU), Markus Soeder, said on Sunday that he is willing to run as the conservative bloc's candidate for German chancellor in a September election, according to senior conservative lawmakers.

Germany's conservative alliance of the Christian Democratic Union (CDU) and their Bavarian sister party, the CSU, are expected to name their chancellor candidate soon.

Soeder said he was willing to run as the conservative candidate if he had the CDU's backing. Chancellor Angela Merkel of the CDU, who took office in 2005, is stepping down after September's federal election.

Following are key facts about Soeder:

* Premier of Bavaria since 2018, he trained as a lawyer and then worked as a journalist before entering politics and is media-savvy, with a Bavarian swagger, confidence and directness that has appealed to voters beyond his southern state during the COVID-19 pandemic.

* Unusually in predominantly Catholic Bavarian, 54-year-old Soeder is a Protestant.

* A Star Wars fan, he also has a fondness for dressing up at carnivals as characters including Shrek, an ogre in the 2001 computer-animated film of the same name.

* Soeder criticised Merkel's open-door policy during Europe's 2015 migrant crisis and in March 2018 agreed with Interior Minister Horst Seehofer's assessment that "Islam does not belong in Germany."

* In a speech to the 2019 CDU party congress, he said he supported electric cars. "But the car is not the enemy in Germany. Some people think an SUV is worse than a nuclear power station!" In February of this year, he said a national coalition with the Greens would be possible but "not easy", adding: "The current programme they have is not suitable for a coalition."

* During the COVID-19 pandemic, he has appeared as a representative of Germany's federal states at news conferences with Merkel and has cut a profile as a decisive leader and good communicator, even if Bavaria has struggled with the coronavirus more than some other states. 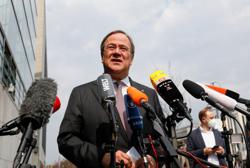