PRAGUE (Reuters) - Slovakia said on Sunday the death toll from COVID-19 has passed 10,000 in the central European country of 5.5 million.

Slovakia has been hit hard by the latest wave of the pandemic although the infection rate and hospitalisations from the virus have eased somewhat in the past few weeks.

It reported 77 new deaths on Sunday, bringing the total to 10,025 since the pandemic first struck in March 2020.

Slovakia, like others in central Europe, had got through the initial outbreak a year ago with relatively few infections and deaths, but has seen a surge this year that has strained hospitals and led to tighter restrictions on daily life.

In the past seven days, Slovakia has posted the world's seventh highest per-capita death rate from COVID-19, according to online publication Our World in Data. Neighbouring Hungary leads the list while the Czech Republic and Poland also are in the highest 10 countries on the list.

Overall in the past year, Slovakia's rate of 1,822 deaths per 1 million people is the 12th worst in the world, according to Our World in Data. 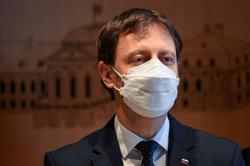