(Reuters) - A British contractor was killed in an attack by suspected Islamist insurgents on his hotel compound in the northern town of Palma in Mozambique, The Times reported https://www.thetimes.co.uk/article/one-briton-killed-in-islamist-attack-on-hotel-compound-in-mozambique-sznzmh875 on Sunday.

Survivors of the attack said he was in the convoy of vehicles that had attempted to escape Amarula Lodge, the report said.

(Reporting by Derek Francis in Bengaluru; editing by Emelia Sithole-Matarise) 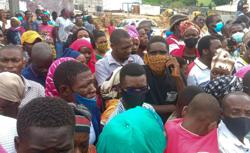