SIRTE, Libya (Reuters) - Scores of Libyan parliament members from both sides of the divided country arrived in the frontline city of Sirte on Sunday for a session this week to debate a proposed unity government.

The parliament has been split - as have most state institutions - since soon after it was elected in 2014, as Libya broke between warring factions in the east and west.

It is meeting this week to debate giving confidence to a government announced by Abdulhamid Dbeibeh, who was designated as prime minister last month through a political dialogue held in Geneva by the United Nations.

Under that process, his government is intended only to oversee the run-up to an election planned for the end of this year and then to cede power to the new authority it creates.

A military ceasefire under the same U.N. process has held since the autumn, after the internationally recognised Government of National Accord (GNA) turned back an assault on Tripoli by Khalifa Haftar's Libyan National Army (LNA).

The ceasefire was supposed to include reopening the main coast road through Sirte, which is held by the LNA. However, groups on the GNA side have refused to do so, saying pro-LNA foreign mercenaries remain near the frontline.

It is not clear how many of the 200 parliament members elected in 2014 will attend the session, with about 75 having arrived by late on Sunday, parliament spokesman Abdullah Belhaq said. Some members have died, others have resigned and some have threatened to boycott the meeting.

Debate on Monday will include discussion of what constitutes a legitimate quorum, and what majority is needed to confer confidence, the parliament rapporteur Saleh Galma said.

If parliament is unable to agree on approving the new government, the U.N. talks forum has said it can do so instead. 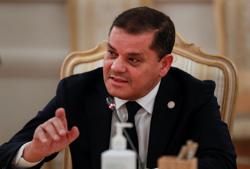