FILE PHOTO: A healthcare worker receives a dose of the Pfizer-BioNTech COVID-19 vaccine at a coronavirus disease vaccination center inside a gymnasium in Taverny near Paris, France, January 9, 2021. REUTERS/Benoit Tessier

PARIS (Reuters) - France reported 23,507 new confirmed COVID-19 cases on Friday, down from 25,205 a week ago, but the number of people in intensive care with the disease reached its highest level so far this year, health ministry data showed.

The number of new cases compared to the same day a week earlier fell for a third day in a row, and the seven-day moving average of new cases fell by 243. However it remained above 21,000 for a tenth day, with a 6 p.m. curfew in place since mid-January so far failing to slow the infection rate.

On January 16, when the curfew was tightened from 8 p.m., the seven-day average of new cases stood just above 18,000.

The cumulative number of cases increased to 3.86 million.

The number of people in intensive care units (ICU) with COVID-19 rose by 47 to 3,680, the highest number recorded so far this year, despite more than 82 % of retirement home residents now having had their first vaccine against the coronavirus.

France has had to send ICU patients from overcrowded hospitals to other regions and the government has also imposed a weekend lockdown in three heavily hit coastal areas, including Calais and Nice.

After the first lockdown in early 2020, the number of people in intensive care dropped from a high of more than 7,000 to less than 400 in August.

It rose again to nearly 5,000 during a second lockdown in November, only dipping below 3,000 for a few weeks before rising again at the end of January. 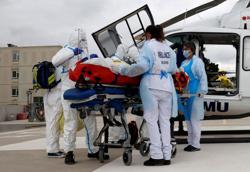