Iraq beefs up security for pope amid rising violence, pandemic

By Amina Ismail and Ahmed Rasheed

A municipal worker walks near posters of Pope Francis, as he cleans a street next to St. Joseph Chaldean Cathedral, where Pope Francis will hold a mass, ahead of his planned visit to Iraq, in Baghdad, Iraq March 4, 2021. REUTERS/Teba Sadiq

BAGHDAD (Reuters) - Iraq is deploying thousands of additional security personnel to protect Pope Francis during his four-day visit, which comes after a spate of rocket and suicide bomb attacks raised fears for the Catholic leader's safety.

A senior security official who has been briefed on the security plan said that forces involved had been trained to deal with worst-case scenarios, from street battles to bombings and rocket attacks.

The hypothetical threats were part of large-scale exercises in preparation for the March 5-8 visit, the first ever by a pope to Iraq. As well as concerns over violence, the country has seen a spike in COVID-19 cases, further complicating preparations.

Francis said he was making the trip to show solidarity with the country's devastated Christian community of around 300,000, just one fifth of the number before the U.S. invasion in 2003 and the brutal Islamist militant violence that followed.

Pope John Paul II came close to visiting, but had to cancel a planned trip in 2000 after talks with the government of then-leader Saddam Hussein broke down.

Over the past two months, attacks on civilians and military targets have increased. In January, Baghdad suffered its first major suicide bombing for three years when two people detonated themselves in a crowded market, killing at least 32.

On Wednesday morning, 10 rockets landed on an airbase that hosts U.S., coalition and Iraqi forces. Hours after that attack, the pope reaffirmed he would be going to Iraq.

The 84-year-old will visit four cities, including the former Islamic State stronghold of Mosul, where churches and other buildings still bear the scars of conflict.

Francis will also visit Ur, birthplace of the prophet Abraham who is revered by Christians, Muslims and Jews, and meet Iraq's top Shi'ite Muslim cleric, 90-year-old Grand Ayatollah Ali al-Sistani.

Interior ministry special forces and the army will set up a security cordon around the pope wherever he goes, while the air force will operate drones around the clock to monitor the routes he will take.

There will be an explosives team and counter-terrorism personnel on standby in case of any suspicious devices or street battles.

Undercover intelligence and national security officers will also be deployed at gatherings attended by the pope, said the source, who declined to be named while discussing security matters.

A technical team can also jam or cut off suspicious phone calls or radio communications, he added.

Vatican officials and local Church leaders say they are satisfied that Iraqi forces will be able to provide adequate protection for the pope and his entourage.

About 10,000 security personnel will be deployed to protect Francis, who may travel in armoured cars in what would be a departure from the norm for him.

"Clearly, we are now talking about a trip where security needs are different than other trips, so it is much more probable, possible that an armoured car will be used," Vatican spokesman Matteo Bruni said on Tuesday.

SPRUCING UP THE STREETS

Preparations for the pope's trip have been in high gear for weeks.

Fresh asphalt has been laid on some roads he is expected to use, and dozens of workers have been applying fresh paint to sidewalks and planting flowers around churches he will visit.

Billboards and posters depicting Francis have been erected, and pristine Iraqi and Vatican flags flutter side by side on buildings.

Christians are generally excited about the historic trip, seeing it as a sign of solidarity after years of persecution, threats and exodus.

But many ordinary Iraqis are less enthusiastic.

"We appreciate that he's coming, but I don't understand why there is so much attention given to this trip," said Nour Ahmed, 21, a university student in Baghdad.

"Our preparations from the security forces' standpoint are enough ... it's under the supervision of the Vatican delegation," said the joint operation's spokesman Tahseen al-Khafaji.

Nearly two weeks ago, the Iraqi government banned most travel between provinces and imposed a nationwide curfew from 8 p.m. to 5 a.m. on weekdays and for 24 hours a day on Friday to Sunday, following a sharp rise in COVID-19 infections.

A police official said the coronavirus precautions had made beefing up protection for the pope easier.

(Additional reporting by Philip Pullella in Rome and Jamal al-Badrani in Mosul; writing by Amina Ismail; Editing by Mike Collett-White) 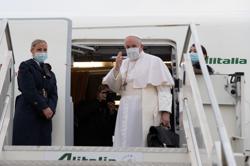