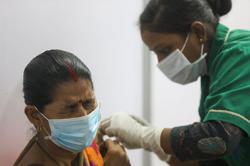 FILE PHOTO: A health worker holds a vial with doses of the Oxford-AstraZeneca vaccine, marketed by the Serum Institute of India (SII) as COVISHIELD, against the coronavirus disease (COVID-19), in Paramaribo, Suriname February 23, 2021. REUTERS/Ranu Abhelakh

(Reuters) - The UK will receive 10 million AstraZeneca COVID-19 vaccine doses made by the Serum Institute of India (SII), the UK government said in a statement on Tuesday.

SII, the world's largest vaccine manufacturer by volume, is mass producing the AstraZeneca vaccine, developed with Oxford University, for dozens of poor and middle-income countries.

"The UK has ordered 100 million doses of AstraZeneca's COVID-19 vaccine, of which 10 million doses will come from the Serum Institute of India," a UK government spokesperson told Reuters.

Reuters reported in February that Britain's Medicines and Healthcare products Regulatory Agency (MHRA) was auditing the manufacturing processes at SII to pave the way for the AstraZeneca vaccine to be shipped from there to the UK.

The move is likely to stir concerns that wealthy Western countries are procuring vaccine doses at the expense of poor countries.

A slew of low-and middle-income countries ranging from Bangladesh to Brazil are dependent on SII's AstraZeneca vaccine, branded COVISHIELD, but demand has been growing from Western countries.

It is also providing doses to the COVAX programme backed by the World Health Organization and GAVI vaccine alliance.

The UK government said the agreement follows assurances from the SII that providing doses to the UK would not impact its commitment to provide vaccines to poorer countries.

Britain has been ahead at inoculating people, with nearly 20.5 million residents receiving the first dose of a COVID-19 vaccine so far, according to official data.

Separately, the European Union's drug regulator is auditing the manufacturing site of SII, Reuters reported on Monday. AstraZeneca has committed to delivering 180 million doses in the second quarter to the EU.

The development was earlier reported by Politico.

(Reporting by Bhargav Acharya in Bengaluru; Editing by Chris Reese and Rosalba O'Brien) 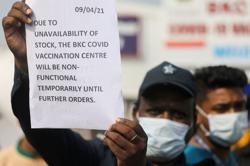