"Having reminded (Rouhani) of the efforts made by France with its partners in the last years to reach a negotiated solution, the (French) head of state stressed it was important that Iran made clear and immediate gestures so that dialogue can resume with all parties to the Vienna deal," Macron's office said.

In 2019, Macron pushed to bring Washington and Tehran back to the negotiating table and to set parameters for wider future talks. Last month he offered himself as an "honest broker." https://www.reuters.com/article/idUSKBN2A42Q6

Expressing his deep concerns regarding Iran's decisions to violate the accord, Macron said it was vital Tehran returned into compliance and fully cooperate with the U.N. atomic watchdog.

Iran has recently accelerated its violations of the 2015 deal in an apparent bid to raise pressure on U.S. President Joe Biden, as each side insists the other must move first.

Several Iranian media outlets said Rouhani had made it clear to Macron that the only way to revive the deal would be for the U.S. to lift sanctions and repeated that Tehran's decision to reduce its obligations was due to the U.S. withdrawal in 2018. 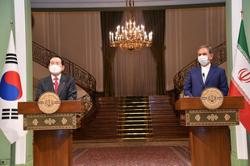