WASHINGTON (Reuters) - Zalmay Khalilzad, the U.S. envoy to the Afghan peace process, will travel to Afghanistan and Qatar to resume discussions with Afghan government officials and Taliban representatives, the State Department said on Sunday.

Khalilzad and his team will also visit other regional capitals as part of a mission aimed at working toward "a just and durable political settlement and permanent and comprehensive ceasefire" in the Afghan conflict, the State Department said in a statement. It did not provide dates or other details.

U.S.-brokered peace talks began in September but progress has since slowed and violence has risen with uncertainty over whether international forces will pull out troops by May as originally planned.

President Joe Biden's administration is conducting a review of a February 2020 deal with the Taliban that is expected to determine whether it will meet the deadline to withdraw the remaining 2,500 U.S. troops from America's longest war.

U.S. and European officials have said the Taliban has not fulfilled commitments it made in the accord amid a surge of violence blamed on the insurgents.

The Taliban, seeking to reimpose Islamist rule in Afghanistan after its 2001 ouster at the hands of U.S.-led troops, denies the charges. 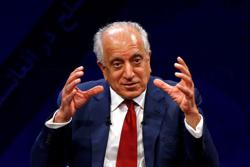