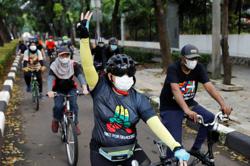 (Reuters) - Myanmar police detained a Japanese freelance journalist at a protest in the commercial capital of Yangon, one of his colleagues said on Friday, the first detention of a foreign reporter since a military coup on Feb. 1.

Yuki Kitazumi, who runs a media production company, Yangon Media Professionals, and used to be a journalist with the Nikkei business daily, according to his Facebook page and interviews with online media, was arrested on Friday morning.

"According to witnesses, he was beaten on his head but he was wearing a helmet, so it didn't cause him much harm. I have contacted the embassy and haven't heard much more information yet," Kitazumi's Myanmar colleague, Linn Nyan Htun, said in a Facebook post on the arrest.

"I didn't witness it, but I received a message from him via Messenger app around 11:30 that he got arrested. After that I lost connection with him," he told Reuters by telephone.

Police in Myanmar did not immediately return calls to seek comment. Kitazumi's phone, listed on his company's website, was unreachable.

Kitazumi is the second foreigner known to have been detained since the coup.

The first foreigner arrested was Australian academic Sean Turnell, an adviser to Aung San Suu Kyi on economic reforms and the most prominent international expert on Myanmar’s financial system.

Kitazumi's company produces video content, from news to movie trailers, and trains journalists with emphasis on free speech, his company says on its website.

Earlier on Friday, Kitazumi wrote a Facebook post titled "Peace," saying many of Myanmar's citizens were out on the streets despite the bloodshed and were thankful to the Japanese for their support of the protesters.

Kitazumi left the Nikkei in 2012 after having worked as a reporter from 2001, a representative of the paper said.

(Writing by Poppy McPherson and Antoni Slodkowski; Reporting by Reuters staff and the Tokyo bureau; Editing by Neil Fullick and Clarence Fernandez) 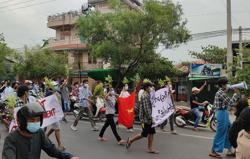