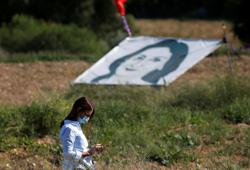 Suspect Jamie Vella (C), one of two men accused of having supplied the bomb which killed Maltese anti-corruption journalist Daphne Caruana Galizia in 2017, wearing full protective clothing as he is currently COVID-19 positive, is escorted out of the back entrance of the law courts after his arraignment in Valletta, Malta, February 24, 2021. REUTERS/Darrin Zammit Lupi

Shortly before they appeared in court, the commissioner of police said late on Wednesday that on the basis of available evidence all those connected to the murder had now been arrested.

With members of the journalist's family in the courtroom, Robert Agius and Jamie Vella were charged with complicity in the murder of the journalist, who was killed by a car bomb as she drove out of her home in October 2017.

Three men were accused in December 2017 of having detonated the bomb. One of them, Vince Muscat, admitted his role in the murder in a plea bargain on Tuesday and was jailed for 15 years.

A legal source said Vince Muscat had provided police with vital information about the case, which has shone a spotlight on corruption in the European Union's smallest country.

Millionaire businessman Yorgen Fenech, who is suspected by police of being the mastermind of the murder, was arrested in November 2019 after the murder plot’s middleman, Melvin Theuma, was granted a pardon and implicated him.

Fenech and all the other remaining accused men have pleaded not guilty.

Prior to the arraignment, which continued past midnight, Police Commissioner Angelo Gafa told a news conference how the police had found machineguns, shotguns and pistols in searches on Tuesday, although they did not find bomb-making equipment.

"With the evidence we have, we are in a position to say that every person involved, be it mastermind or accomplice, is under arrest or facing charges," Gafa said, although he stopped short of saying that the police now consider the case closed. 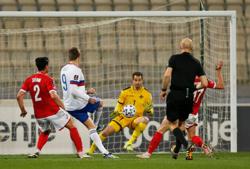