PARIS (Reuters) - Deprived of lavish restaurants and forced to stay at home at night to curb the spread of the coronavirus, French lovers are turning to sex toys to spice up their Valentine's Day.

"Maybe at a time when everything seems forbidden, sexuality has become one of our last bastions of freedom," said Patrick Pruvot, founder of the Passage du Desir chain of sex toy stores.

In the three months running up to this year's Valentine's Day, sales at the Passage du Desir's seven outlets jumped 68% on previous months. A year earlier, sales rose by just 12% during the same period ahead of Feb. 14.

Candy cuffs and other sex toys line the shelves of Pruvot's store, surrounded by shuttered restaurants and cafes in central Paris. Large heart-shaped red boxes with filled with 14 toys for the bedroom bring a Valentine's Day twist to an advent calendar.

"We would normally go to a restaurant but that's going to be a bit difficult. So I thought it might please him to show him some attention," said Maryne Fraudin, 21, as she browsed the merchandise for a kinky game for her and her boyfriend.

France prides itself as a nation of seducers. Seduction influences not just how the French relate to one another, but how they do business, define style, elect politicians and enjoy food and drink, wrote Elaine Sciolino in her book La Seduction.

For a long time, the French were slow to accept sex toys, a taboo that had been slowly wearing off before the pandemic left many couple with more time on their hands at home, Pruvot said.

"The COVID crisis sped up the trend," he said.

Other countries have seen a similar phenomenon during COVID-19 lockdowns. From Denmark to usually conservative Colombia, sales of sex toys leapt early in the pandemic, while British lingerie chain Ann Summer reported higher sales during the first lockdown.

"What else can we do if we can't go out," said Anthony Jeka before he walked out with his partner and a carrier bag full of goodies. 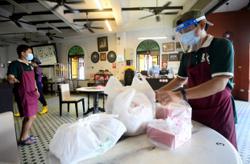