WELLINGTON (Reuters) - New Zealand male lawmakers are no longer required to wear a necktie in parliament after the rule was dropped following a Maori MP's protest, calling a tie a 'colonial noose'.

Speaker Trevor Mallard prevented Rawiri Waititi from asking questions in the debating chamber on Tuesday and eventually ordered him to leave for not wearing a tie.

Waititi, 40, was wearing a taonga, a Maori greenstone pendant instead, which he said was a Maori business attire.

The incident sparked a debate about why a necktie was mandatory with Waititi describing the piece of clothing as a 'colonial noose', and said forcing him to wear it was a breach of his rights and an attempt to suppress indigenous culture.

After a meeting with the Standing Orders Committee, Speaker Mallard said late on Wednesday that he had decided to make ties optional in the House.

"As Speaker, I am guided by the committee’s discussion and decision, and therefore ties will no longer be considered required as part of ‘appropriate business attire’," Mallard said.

"I acknowledge those who felt this was an important issue worthy of further consideration," he said.

Waititi and a handful of other MPs were spotted without a tie in parliament on Thursday, media reports said. 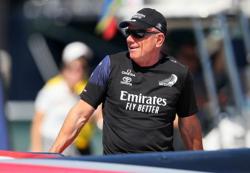