By Alexandra Valencia and Brian Ellsworth 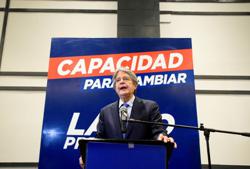 QUITO (Reuters) - Ecuadorean economist Andres Arauz on Monday prepared to campaign for a presidential run-off election as authorities continued counting votes to determine whether he would face a conservative banker or an environmental activist.

The race for runner-up between pro-market candidate Guillermo Lasso and anti-mining indigenous leader Yaku Perez was too close to call, with Perez ahead by less than one percentage point and manual recounts appearing likely.

Perez's strong performance marks the best-ever showing for an indigenous presidential candidate and throws open a race that had been for months been defined by ideological rifts between free markets on one hand and socialist largesse on the other.

Perez and his supporters began a vigil on Sunday night outside a Quito hotel where election authorities were counting votes, vowing to prevent voter fraud from getting in the way of his advancing to the April 11 runoff.

Lasso in a celebratory rally in his home city of Guayaquil vowed that a full review of poll statements would show he would make the runoff.

Either candidate could request hand recounts.

Arauz, 36, a protege of former president Rafael Correa, has promised to make direct cash payments of $1,000 to 1 million families upon taking office, and says he will disavow the conditions of a $6.5 billion IMF financing package.

Lasso has promised to spur the economy with increased foreign investment and tax reductions.

Perez' activism has focused on protecting rivers from mining, and has promised to balance the country's fiscal accounts by recovering funds stolen under previous governments.

Also making a surprise showing was little-known businessman, Xavier Hervas, a center-left candidate who drew 16% of the vote despite never having run for office.

President Lenin Moreno, a former Correa ally who was elected in 2017, did not seek a second term.

Financial markets are watching, and Arauz's rhetoric has already sparked a bond selloff.

He has said he will continue paying the country's debts, but has said social investment will take priority and also has called for an investigation of last year's $17.4 billion bond restructuring.

Last month, Ecuadorean bonds were the worst performers among the JPMorgan EMBI Global Diversified index, with a -15% total return. 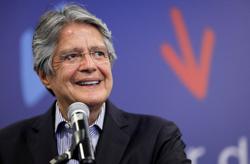 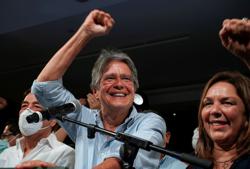