By Nate Raymond and David Shepardson 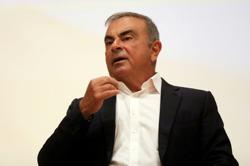 FILE PHOTO: Carlos Ghosn, the former Nissan and Renault chief executive, gestures as he speaks during a news conference at the Holy Spirit University of Kaslik, in Jounieh, Lebanon September 29, 2020. REUTERS/Mohamed Azakir/File Photo

The ruling by U.S. District Judge Indira Talwani in Boston cleared the way for U.S. Army Special Forces veteran Michael Taylor and his son, Peter Taylor, to be handed over to Japan, after the U.S. State Department approved their extradition.

The Taylors' lawyers had argued they could not be prosecuted in Japan for helping someone "bail jump" and that, if extradited, they faced the prospect relentless interrogations and torture.

Ghosn in a court filing sought to support their claim, arguing he faced prolonged detention, mental torture and intimidation in Japan and the Taylors would face "similar or worse conditions."

But Talwani said that "although the prison conditions in Japan may be deplorable," that was not enough to bar extradition and that authorities had established their alleged actions were an "extraditable offense."

Lawyers for the Taylors quickly moved to appeal. They declined to comment, as did Nissan. Ghosn and the Japanese embassy in Washington did not immediately comment.

The Taylors were arrested in May at Japan's request. Talwani put their extradition on hold on Oct. 29 so she could hear their challenge to the State Department's decision.

Prosecutors say the Taylors helped Ghosn flee Japan on Dec. 29, 2019, hidden in a box and on a private jet before reaching his childhood home, Lebanon, which has no extradition treaty with Japan.

Ghosn was awaiting trial on charges that he engaged in financial wrongdoing, including by understating his compensation in Nissan's financial statements. Ghosn has denied wrongdoing.

Prosecutors said the elder Taylor, a private security specialist, and his son received $1.3 million for their services.

(Reporting by Nate Raymond in Boston and David Shepardson in Washington; Editing by David Gregorio and Grant McCool) 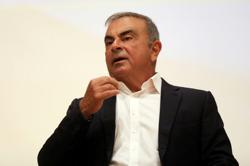