(Reuters) - Reactions to the death of U.S. TV and radio personality Larry King:

"Larry King was a Brooklyn boy who become a newsman who interviewed the newsmakers. He conducted over 50,000 interviews that informed Americans in a clear and plain way. New York sends condolences to his family and many friends."

"I enjoyed my 20+ interviews with Larry King over the years. He had a great sense of humor and a genuine interest in people. He gave a direct line to the American people and worked hard to get the truth for them, with questions that were direct but fair. Farewell, my friend."

"Larry King was a radio and TV legend with an insatiable curiosity about people and a real sense of humor. He could get anyone talking, from Hollywood stars to the guy on the corner. In the 1990s, Larry King Live even became the most important show in American politics. RIP."

"I lost a dear friend and mentor. Truly an American treasure. Rest in peace, Larry King."

"He left his mark on so many lives and was a brilliant broadcaster and a friend to so many. My thoughts and prayers go out to his family and friends. He will be missed."

"RIP Larry King. one of the only talk show hosts who let you talk. Legendary."

ITV PRESENTER PIERS MORGAN:"Larry King was a hero of mine until we fell out after I replaced him at CNN & he said my show was 'like watching your mother-in-law go over a cliff in your new Bentley.' (He married 8 times so a mother-in-law expert) But he was a brilliant broadcaster & masterful TV interviewer." 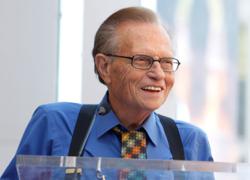