ROME, Jan. 21 (Xinhua) -- Delays in the delivery of one of the two authorized vaccines against the coronavirus would continue affecting Italy's vaccination campaign in the short term, with a 20-percent shortfall expected next week, authorities said on Thursday.

Up to Thursday, the vaccines have been administered to over 1.28 million people in Italy, and the number of people who were given both doses is 25,066, according to government data.

The shots administered made 82.3 percent of 1,558,635 doses delivered so far, most of which provided by the pharmaceutical company Pfizer, which recently announced it would slow down its deliveries to European Union (EU) countries.

"We have been told (by Pfizer) that we will receive 20 percent fewer doses next week," Italy's Extraordinary Commissioner for the Coronavirus Emergency Domenico Arcuri told a press conference.

He said the country already suffered a 29-percent cut in Pfizer deliveries last week, adding that such delays were having a visible impact on the vaccination plan at a moment when some people began to be in need of receiving the second mandatory shot.

The Pfizer vaccine has to be administered in two shots 21 days apart.

"Up to last Saturday, the vaccine was administered to an average of 80,000 people per day," Arcuri said. "After Saturday, this average has dropped to some 28,000 people."

As anticipated on Wednesday, the commissioner said the government was considering pursuing legal action against Pfizer for its unilateral move.

For its part, Pfizer earlier this month had announced its deliveries to the EU would return to normal starting from the week Jan. 25-30.

While the vaccination plan was marred by worries, Italy was seeing less pressure over its health system recently, and data on Thursday remained mildly encouraging.

Some 4.3 percent of those actively infected are currently hospitalized, while some 0.5 percent are in intensive care units (ICUs).

"The pressure on ICUs and on normal hospital wards has been softening for the last few days; this suggests the tightening of restrictions shortly before Christmas is having some effects," Arcuri noted.

Of the second vaccine authorized in Italy -- the one developed by Moderna -- only some 46,800 doses have been distributed so far, according to the commissioner's office.

Several national campaigns with authorized COVID-19 vaccines are now underway around the world, and a further 237 candidate vaccines are being developed -- 64 in trial phase -- in several countries including China, Britain, the United States, and EU member states such as Italy and Germany. 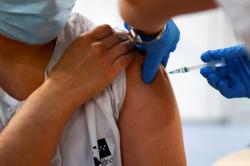