FILE PHOTO: People walk down a city laneway after coronavirus disease (COVID-19) restrictions were eased for the state of Victoria, in Melbourne, Australia, October 28, 2020. REUTERS/Sandra Sanders

SYDNEY (Reuters) - Australia's second most populous state of Victoria eased social gathering restrictions on Friday after recording 16 days without any new coronavirus infections in the community, doubling the number of people allowed to gather at home to 30.

The state, which will host the Australian Open tennis tournament in its capital Melbourne next month, has managed to eliminate the virus following an outbreak and one of the world's strictest lock-downs last year.

Ahead of the Feb. 8-12 Grand Slam, as many as 72 players were confined to their hotel rooms for two weeks upon arrival. On Friday, Spain's Paula Badosa became the first player to confirm a positive test for COVID-19 while in quarantine in Melbourne.

Australia has fared better than most developed economies in the pandemic through swift border closures, lockdowns, widespread testing and social distancing. On Friday, it achieved a fifth day of zero coronavirus cases in the community nationwide.

With a total of just over 28,700 cases, the overwhelming majority in Victoria, and 909 COVID-19 deaths, Australia plans to start vaccinations in February.

Following a meeting with state and territory governments, Prime Minister Scott Morrison said the plan was subject to production and distribution issues vaccine makers were experiencing.

"We would hope to commence in mid- to late-February but that will obviously change and be subject to any impacts on production schedules overseas," Morrison told reporters in Brisbane.

"At this stage we're relying on the delivery of the vaccines from those producing countries at this early stage. We're being very careful to be clear about expectations here. There are a huge demands across Europe from other clients."

Morrison also said Australia would not increase existing quotas for returning citizens, which were slashed earlier this month due to concerns about more contagious strains of the virus originating overseas.

Queensland state Premier Annastacia Palaszscuk said three new cases of overseas COVID-19 transmissions had been detected in the country's third most populous state, but there had been no new positive cases detected in the community.

That was the 10th day without local transitions there following a small outbreak of a more contagious variant that infected at least six people.

Victorian Premier Daniel Andrews said the bigger gatherings would be allowed at home from mid-night and travel with COVID testing from most parts of NSW and Queensland would be allowed without having to quarantine for 14 days.

Meanwhile, Emirates, which had temporarily halted flights to Sydney, Melbourne and Brisbane due to Australia's strict testing rules, said on Thursday it would resume those flights later this month.

(Reporting by Paulina Duran in Sydney; Editing by Michael Perry) 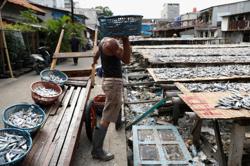