PARIS, Jan. 19 (Xinhua) -- France registered 23,608 new COVID-19 cases in the past 24 hours, bringing its accumulative total since the outbreak of the epidemic to 2,938,333, data from the health authorities showed on Tuesday.

Now France has recorded the world's sixth highest tally of COVID-19 cases after the United States, India, Brazil, Russia and the United Kingdom.

In one day, the respiratory illness had claimed 369 lives in hospitals and 287 in nursing homes. The combined number of fatalities caused by the coronavirus so far in the country stood at 71,342, according to figures posted on the government data website.

Since Jan. 16, France's 67 million inhabitants have been locked down during the night. Shops also have to shut down from 6 p.m to 6 a.m., and indoor sports activities have been suspended.

To date, France has detected about 2,000 cases of the coronavirus variant first detected in the United Kingdom, with an average of 200-300 infections per day, Health Minister Olivier Veran said early Tuesday.

"When a virus is more aggressive and more contagious, it can become dominant quite quickly," the minister told France Inter radio.

In a report published on Monday, the French National Institute of Health and Medical Research (Inserm) said it expected the new COVID-19 strain (VOC) to become dominant at home between late February and mid-March, depending on the epidemic evolution.

"These results support the need for strengthened social distancing measures and for accelerating the vaccination campaign to face the threat of the VOC variant," it noted.

Three weeks after it had launched its vaccination programme, France has inoculated 585,664 people, including residents and caregivers at retirement homes, medical staff in hospitals and front-line health workers aged over 50, Health Ministry said. 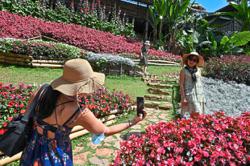