(Reuters) - U.S. President-elect Joe Biden is set to issue several measures on Wednesday aimed at rolling back some of the restrictive immigration policies put in place by his predecessor President Donald Trump. Some reversals will be immediate while other policies will take much longer to unravel.

He will propose an eight-year pathway to citizenship for many of the estimated 11 million people living in the country unlawfully.

The proposal will also offer permanent protection for young migrants in the Deferred Action for Childhood Arrivals (DACA) program, known as "Dreamers." Started by former President Barack Obama, the program provides deportation protection and other benefits to approximately 645,000 people.

The citizenship wait would be shorter - three years - for many DACA holders, farm workers, as well as recipients of Temporary Protected Status (TPS), which grants deportation protection and allows work permits to people from countries hit by natural disasters or armed conflict.

Biden will also immediately issue a memorandum directing the Department of Homeland Security and Attorney General to "take all appropriate actions" to defend DACA from challenges. Trump's Republican administration tried to end DACA but was stymied in federal court. The program still faces a legal challenge in a Texas court.

Biden will immediately rescind a controversial travel ban put in place by Trump, according to a factsheet shared with reporters.

Trump banned travel from some Muslim-majority countries shortly after taking office in 2017. Following legal challenges, the U.S. Supreme Court upheld a revised version of the ban in 2018. It has since been expanded to 13 nations.

During the coronavirus pandemic Trump issued proclamations blocking the entry of many temporary foreign workers and applicants for green cards. While Biden has criticized the restrictions, he has not yet said whether he would immediately reverse them.

Biden will immediately repeal a Trump order to increase interior enforcement. The administration will leave it to the Department of Homeland Security and other agencies to set enforcement policies "that best protect the American people and are in line with our values and priorities," according to the factsheet.

Biden will immediately revoke Trump administration orders that sought to exclude noncitizens from being counted in the census and when U.S. congressional voting districts are next redrawn, the factsheet said.

Biden will immediately pause construction of the U.S.-Mexico border wall and end an emergency declaration that helped authorize funding for it, according to the factsheet. Trump touted the wall as a major accomplishment during a Texas visit just days before leaving office.

Biden's administration will review the legality of funding and contracting methods used for wall construction and determine how to redirect funding.

One Trump program called the Migrant Protection Protocols (MPP) forced tens of thousands of asylum seekers to wait in Mexico for hearings in U.S. immigration court. Biden said during the campaign he would end the program on day one. His transition team, however, has said dismantling MPP and restoring other asylum protections will take time.

Under rules put in place by the U.S. Centers for Disease Control during the coronavirus pandemic, most migrants arriving at the border are now immediately expelled. Biden's team has not pledged to reverse that policy right away.

Migrant caravans have been on the move in Central America, with some aiming to arrive at the southwest border after Biden's inauguration. On Monday, baton-wielding Guatemalan soldiers clashed with migrants, removing a large part of a caravan that included women and children.

Biden has also said he would raise the cap for refugees resettled in the United States from abroad to 125,000 from the historic low-level of 15,000 set by Trump this year. 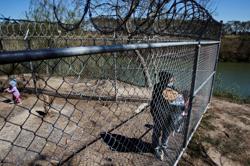